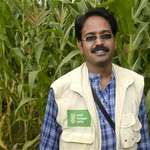 "Four times," he said, without blinking an eye. "Four times in five years", he repeated, standing on a thatched walled house by the river Jamuna in Sirajganj, Bangladesh. When I asked him, how many times he re-built his house.

Bangladesh: the world’s most vulnerable nation to climate change

Located at the bottom of the mighty river system of 57 trans-boundary rivers coming down from India and Myanmar, it has no control on the water flow and volume going through the country jumping down to the Bay of Bengal. Coupled with the high level of widespread poverty and increasing population density, limited adaptive capacity and ineffective local governance have made the region one of the most adversely affected on the planet. Climate change cannot be stopped. So it means living with the consequences.

What we do as Welthungerhilfe to support people in Bangladesh? Starting a climate-resilient livelihood programme

I was visiting Bangladesh to get introduced to work areas for our climate resilient livelihood programme in Char and Haor, two most vulnerable areas due to water related stress. I met dwellers of the Char areas of Sirajganj. Charlands are the sandbars that emerge as islands within the river channel as a result of the dynamics of erosion and accretion in the rivers.

An estimated 6.5 million people, around 5% of the Bangladeshi population live on the Chars. In addition to the major physical risks associated with the rivers, like forceful flooding as well as erosion and loss of land, Char-dwellers are marginalized from the benefits of mainland Bangladesh.

It was early in the morning of beginning of November, and fog spread a thin layer over the landscape – endless river on one side and temporary shelters on the bank of the Charland on the other side. The land behind house, treated as cropland was full of young plants of lentils. Few winter crops like radish and brinjal (aubergine) were also noticed in the backyard. Few chickens were roaming around near the two or three cows, who were chewing the cud standing on the courtyard.

Floods and erosion disrupt the lives of char-dwellers in Bangladesh

The materials thus are all temporary – tin for comparatively less poor and thatched wall for poor. We went to a char which has been steady for the last 20 years, but is shifting and changing shape regularly by sudden change of course of the river branch. ‘There are chars which survive only a few months. That is a new one, we have grown mustard and wheat there. Let’s see how long that survives,’ another man said, pointing towards the horizon. The fog was getting clear, making that Charland visible. A boat sailed over to us.

‘We do rice in the rainy season, but most of the time it fails which prolongs and intensifies the period of seasonal unemployment and subsequent food shortage,’ an old boatman told us. ‘Nothing can be done to fight out. Pray for us to god – if you can stop the river by a bund,’ the old man shouted waiving at us.

I came back confused and clueless.

Consequences of climate change: my impressions from another visit to Haor basin

I was travelling through another vulnerable region, the Haor basin or the Sylhet basin in Sunamganj. I met the farmer Monirul.

‘We are like fish. Water is not new to us,’ Monirul said, sitting by his rice field. ‘But now, the water stays for longer, destroying crops and making our life difficult’.

The basin is estimated to spread over an area of 25,000 square kilometres. The area is flooded every year during monsoon. The hilly rivers coming down from the Khasi and Jaintia hills in Meghalaya of India carry particularly high volumes of water as they come from some of the rainiest places in the world.

During July to November due to flood these areas go under deep water and look like seas with erosive water surface, turning Haor settlements mostly built on earthen mounds into islands. During the dry season water usually drains out, leaving small shallow lakes, and becomes a mosaic of wetland habitats including streams, canals, large areas of seasonally flooded cultivated plains with extensive rice cultivation. In November, when I was there, the water was receding, winter rice was standing on the field.

Fishing illegally – the only source of income

‘This is our only source of income’, Monirul shared. ‘Sometimes we do fishing, but illegally. Though we do not get that much fish nowadays to sell on the market’. He took me to a place where fishing was happening. Fishing rights have been given to the highest bidding groups often consisting of local powerful and rich.

Climate change affects the pattern of rainfall intensity and its variability

Regional projections also revealed that climatic changes would strengthen monsoon circulation and increase the magnitude and frequency of extreme rainfall events, which also disrupts the drainage mechanism. This was confirmed by the farmers present there, when they said water takes longer to recede nowadays.

Others shared that there were traditional rice varieties that can withstand waterlogging, also more fish to catch. BRRI rice – introduced by the Bangladesh Rice Research Institute (BRRI) – can be planted early as it requires a shorter maturing time, so that the harvests can be made before the water gets into the basin. ‘But it needs urea, which incurs cost,’ they told me.