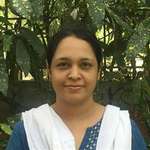 The current situation in Cox's Bazar in Bangladesh is unparalleled and unimaginable. Day after day, more and more Rohingya arrive at the reception camp in Bangladesh. Since the end of August over 615,000 people have sought refuge here and the number of new arrivals rises daily.

“A few days ago I visited this camp and there still weren't very many tents in this area,” reports Mohammad Jakariya, who works for Welthungerhilfe partner Anando. While he leads me through the Bhalu Khali camps, he explains: "Here on the left you used to be able to see trees. I am amazed how quickly this area has been transformed into a settlement and the tents sprouted up.”

Spread across several camps, thousands of desperate families are living in the Ukhia sub-district, sheltering in temporary shelters made from fragile black plastic sheeting. Families that arrived some years ago live close to the main street. The recently arrived Rohingya have no other choice than to settle inside the camps or on the hills. It is a long way from there to the main street and the route becomes swampy and slippery when it rains. It is extremely difficult to reach the people in these overcrowded areas. Scores of narrow and muddy passages make the distribution of aid supplies and medical assistance almost impossible.

The army and humanitarian aid organisations do their best to organise the aid distribution. They are supported by the majhi, representatives of the refugees, elected in the camp. Each majhi speaks for approximately one hundred families, in some cases, however, is it well over 170. Within his area of responsibility, he distributes the money tokens with which the families can collect their rations themselves. The majhi is also the link to the aid organisations and the army. If something is needed urgently, he raises the issue, as there are obviously still several weak points in the provisioning of the camp residents. "I have to take care of 173 families. Until now, we received up to 25 kg of rice, but no lentils or vegetables," says Azizul Haq, a majhi from the Gondum camp, who came from the Maungdaw region with his family.

Six tube wells were installed in the area, but only four of them work. There are no wash rooms and the existing toilets are not sufficient. “We have six toilets for 173 families. Imagine that yourself! We also have no separate toilets for women. Anyone who comes here to help us, we ask them to build more toilets,” says Azizul Haq.

Too few sanitation facilities and a concerning lack of hygiene - the threat of epidemics such as diarrhoea, cholera and other water-borne diseases is immensely high. The camp in Cox's Bazar needs urgent support. Food, drinking water and shelter, as well as health, hygiene, sanitary provision and maternity care are all in demand. The United Nations assumes that up to 1.2 million refugees will arrive at the camp. In order to provide for this huge number of people, the UN estimates that 430 million US dollars will be required. Only one-quarter of this amount has yet been covered, something that received criticism around the International Donor Conference on 23 October.

Working with its long-standing local partner organisation Anando, Welthungerhilfe is supplying food to 2,600 families in Cox's Bazar district. An expert from the Welthungerhilfe Emergency Response Team is supporting the partner to organise the increase in aid. 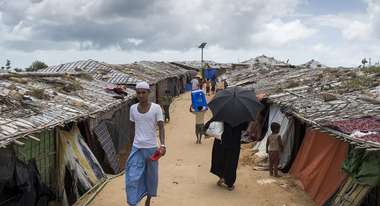 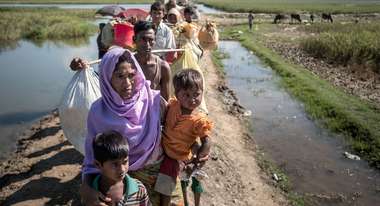 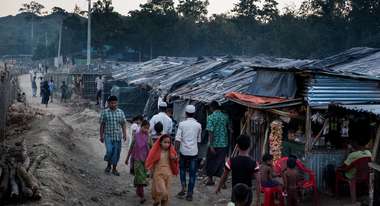 A Humanitarian Disaster with Little Hope

Welthungerhilfe staff member Jessica Kühnle traveled to Bangladesh and experienced the severe situation of the Rohingya on the spot.