Never-ending fields, framed by lines of palm trees. A family of wild pigs crossing the road, the little piglets following the mother, looking ahead and ignoring the insistent honking, forcing cars to stop. Young girls in a school uniform riding a cycle on the side of the road, their dupatta (scarf) flowing freely behind them. Older women in colourful sarees walking barefoot on unpaved roads, miraculously balancing a basket full of fuel wood on their heads. It was as if a thin layer of grey had been lifted from my vision and I could see India’s real colours and, mostly, real soul.

For the first time, after having lived for two years in the most polluted city in the world – Delhi – I was visiting India’s rural areas. At the end of the trip, spent visiting villages and tribes in West Bengal, I started seriously considering taking up the offer I got from many of the women to come back and stay for a bit. Sure, there would be no air conditioning (and the heat in West Bengal is scorching!) but the beautifully painted houses, the warmth of the villagers, the peace that seemed to be pervading the whole area – not to mention the delicious Bengali food – were a fairly tempting alternative to the chaos, traffic and frenzy of India’s capital city.

I knew I would be able to eat organic vegetables cultivated in the nearby fields, free from any chemical pesticides or fertilizers; I could taste typical tribal dishes, from the family’s reared rabbits or poultry and cooked on bio-gas fed stoves. My struggle to find organic eggs and milk in Delhi (every-day products in my German years) would come to an end here: for breakfast I could choose between locally produced puff-rice with fresh milk or free-range chicken’s eggs fried in locally produced mustard oil. Ok, true, maybe in the end I would never really give up the comfort of my urban life, but what I describe above is now a reality for many rural and tribal families in Eastern and Central India, who attended trainings organized by Welthungerhilfe and our local partners.

In three days of driving around the Bankura district, finding myself often wondering how we did not crash into that truck that seemed to come at full speed in our direction, having once to leave the car and continue on foot, because the village we were visiting was in the middle of the forest, I have met so many people whose life was transformed by one of our Rural Skills Development initiative projects. Choosing those to write about was not an easy task.

While their individual stories partly differ, there is a common feature that unites all of them: pride. For being now self-sufficient, for managing to provide healthy food to their family, for having considerably increased their income, for being able to send their children to school.

Gouranga Mahato did not want to end up as a labourer in a far-away city: he heard the stories from other young villagers who had to migrate there to find a job, and most of them spoke of isolation, massacring working hours, social exclusion and ghastly living conditions. Gouranga decided instead to invest a very small amount of money and attend a Green College training (co-funded by the German Federal Ministry for Economic Cooperation and Development), where he learnt about animal rearing and para-veterinary skills. From the two buffaloes and ten chickens he began with, after the training his farm grew to include 37 more chickens, 32 sheep, 19 goats, 3 cows and 3 calves, which he feeds with fodder he himself produces. Showing off his healthy looking sheep, he beams: I always wanted to start this business but I never had enough confidence to do so, especially because animals need a lot of medical attention! The training helped me gain the confidence and the skills to do this by myself. He has applied for a government loan to expand his business and has already started building his new farm, where he plans to soon have 100 goats and 100 sheep. "I want to show other people my age that livestock – if done properly – can sustain a family, and they don’t need to leave the village to look for jobs somewhere else."

How self-sufficiency can work

The Mandai family, from the Santai tribe, is an amazing example of self-sufficiency, result of the learning from the ‘Sustainable Integrated Farming Systems’ (SIFS) project (also co-funded by the German Federal Ministry for Economic Cooperation and Development). The dung produced by their cows is stored in the bio-gas structure in their garden, which is connected through a pipe to the kitchen stove. The slurry from the bio-gas goes into the vermi-compost and the result is then used as fertilizer in their fields; the soil is now much more fertile and retains more water, thus reducing the need for irrigation.

Eggs, milk, oil – now the family produces all of this. Except salt and some spices, they do not need to buy anything from the market. Whereas before they cultivated only one crop and had six months of fallow land, now some patches are cultivated the whole year around, and they get vegetables from 3-4 different crops.

Out of all the success examples I encountered in these few days, my favourite was by far the one of ‘the rabbit ladies’ – maybe because of their smiles, which could hardly contain their happiness, for the new turn their life had taken. Rohuni, Thakurmani and Shakuntala used to work as labour in nearby paddy fields. This meant early mornings, long working hours and little money. All this changed when they attended a ‪‎Vocational‬ Education and ‎Training (‪co-funded by the European Union‬) on rabbit rearing few years go: at the end of it, they were given a cage and two rabbits. They now have to turn work down, because they have their hands full managing the 20 rabbits, 9 pigs, 25 goats and 35 hens they own. The District hired them as trainers and sends them around the region to train other tribes on rabbit rearing. People from surrounding villages bring their animals to them to be vaccinated.

When the District Collector came to ask if they needed further support, they kindly declined: they are now completely self-sufficient and are looking to expand their business into rabbit skin processing. While we were visiting them, they shared with us funny anecdotes from their first trips outside the village, when they were still at the beginning of their learning process. Recalling those moments made them laugh out loud: oh, how inexperienced and shy they were! But those times are long gone: now they are established and popular animal farmers with a flourishing business, who asked the Welthungerhilfe team and our local partner: Let´s get another training on how to train others: in this way we can get better at teaching other tribes’ members how to become as successful as we are now.

Maybe after all I will consider one of these villages, for my next winter vacation… 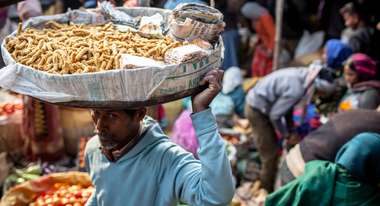 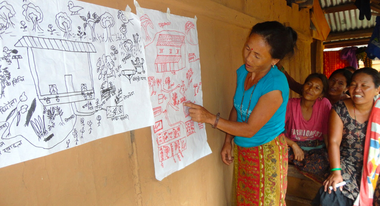