“When the first earthquake struck, the cupboard fell over us. We could not move, we were blocked under it for the whole time the earth shook. It was like being on a boat, we were swaying from one side to the other!” This is how Seema Luitel, Programme Manager at Welthungerhilfe Nepal, experienced the earthquake that hit her country on 25 April 2015, causing so far more than 8,000 deaths and severely damaging almost 290,000 buildings.

She was sitting at the table with her family when all of a sudden the earth started moving. They didn’t have time to run out, because the cupboard immediately trapped them underneath. Those moments, she remembers, were absolutely terrifying. They thought they wouldn’t make it out of there alive. Only when the floor stopped shaking, her husband managed to lift the cupboard with his back – he has had serious back pain since. Her 19 year old daughter came out of it full of bruises, and Seema’s arm, badly hurt during the accident, took weeks to heal.

This traumatizing experience is sadly not the only scar this earthquake will leave her with. The cousin of her husband, Mr. Subedi, is one of the people who died in Kathmandu on 25 April.

„My husband and my daughter deal with these things much better, but this is something that I’ve always been afraid of. And Mr. Subedi used to be like me, always worried something like this might happen to him“. That day, he said goodbye to his family to go to a work meeting, in the Kalanki area. At 11:56 local time, the life of millions of Nepali families changed forever; his family’s too. As soon as the earthquake was over, his wife tried to call him, but could not get through, as the phone lines were down for a long time. Unable to get in touch with him, her worry increasing with every mute signal she got from the phone, the whole family went to look for him. As they reached the place where the meeting was taking place, a surreal scene presented itself in front of their eyes: all building were standing, they were cracked and damaged, but none of them had collapsed. Only one was flattened to the ground, a 4-storey building that imploded into one single floor: the one where Seema’s relative was, when the earthquake struck. Someone standing nearby, who had witnessed the building collapse, informed the distraught family that all victims had been brought to a nearby hospital. There, the family received the news they had been dreading: Mr. Subedi had not survived. He was dug out of the rubbles already dead, his half-exposed body covered by a policeman with his own jacket, as a sign of respect towards someone who could not do that himself anymore. “His home is completely undamaged and so are all the buildings around the one that collapsed. It is almost as if he went to meet his fate” whispers Seema.

I find it hard to hold back my tears, while hearing this story, but Seema’s voice never breaks down. Except her moist eyes, she does not falter a single time. “I think I have not yet processed what happened, I haven’t fully absorbed it,” she explains. Coming to work has been a way to postpone the moment when she will have to elaborate the tragedy that hit her and her family; but this is not the reason why she was in the office already the day after the earthquake. “You all need me, need us”; she is right!

Without the local staff, the Emergency Response Team who came from Germany would have a much harder time to function, as we rely heavily on the ‘local knowledge’ too.

Seema never failed to come to work, showing up at the office briefly even in the days the office was supposed to be closed, since she knew that the work of the Emergency Response Team did not stop over the weekend. She took only one day off, as the rest of the local staff did: the day after the second earthquake that shook the country again – and the confidence newly built of its people – on 12 May. With a magnitude of 7.3, the earthquake led to the collapse of buildings previously damaged by the first one, triggered several landslides in the rural areas, and caused the confirmed death of 110 people, number bound to increase as many areas are now completely isolated because of the landslides. For Seema, this was re-living a nightmare all over again.

“I was on the phone with my daughter when it started, and my first reaction was to dive under my desk, I was scared I wouldn’t make it out of the office in time”, she recounts, not without difficulties… She crouched there, under the table, the world around her shaking, the office empty, terrified that this time she might not be as lucky as the first one. She was, and once the trembling stopped, she could walk out and join the rest of the Welthungerhilfe team, but it took her a long time until she was able to calm down and drive back home. Her family is also safe; her husband, who works in this field too, was in Gorkha distributing relief material with their daughter, and they didn’t even feel the earthquake. They spent the following day together, in their house in Kathmandu miraculously still standing, grateful that they could hug each other once again.

Seema’s own healing will take a long time too. She is a very spiritual person, as she defines herself, and this belief will help her moving on and looking ahead. Talking with her, in these days, listening to what she went through and how she overcame it, witnessing her strength, her courage and being myself comforted by her never-faltering smile was incredibly inspiring. As long as Nepal has people like Seema, people like the rest of the Nepali colleagues, working hard for its rehabilitation, there is hope. It is now up to us, to Welthungerhilfe and the international community, to ensure that they have the resources to carry out their job and make it possible, for them and the 27 million others living in this country, to build their future again.

Nepal After the Earthquake

The April 2015 earthquake destroyed houses, infrastructure, schools and natural resources. One year later, there is still a lot to do. 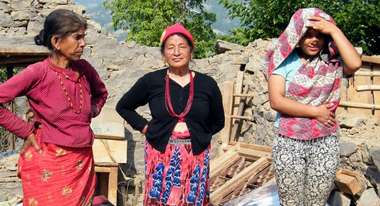