For a long time, Zimbabwe was the breadbasket of Africa. However, the landlocked country, which once boasted a booming agricultural industry and a wealth of natural resources, has been mired in an economic crisis for years. It can no longer provide staple foods for its residents, with more than a quarter of all children under five years of age suffering from chronic malnutrition.

A road trip through western Zimbabwe will show off a landscape with impressively green and lush vegetation. The same cannot, however, be said of its fields. Farming families generally cultivate only a single crop such as maize or millet. This dependence becomes problematic if the crop fails because of droughts or a lack of rain due to the effects of climate change. Many smallholders do not have the knowledge and experience to apply cultivation methods that are more effective and appropriate for local climate. They hardly have access to infrastructure, new equipment or technology and also lack the credit to invest in, for example, high-quality seeds.

The smallholder agricultural economy has been neglected by the government for years. Agricultural production diminished drastically under the authoritarian government of Robert Mugabe. In the course of the land reforms at the end of the nineties, many large farms were expropriated. Thousands of farmers lost their jobs or were displaced. Unemployment and food and nutrition insecurity have been a defining feature of daily life ever since.

On the Way to Sustainable Agriculture Together

In the district of Gokwe, southwest of the capital city of Harare, the majority of the population is living on the produce from its fields or income from the cotton plantations. They have hardly any food and nutrition security. More than 40% of the region’s infants are chronically malnourished. Together with the local partner Agricultural Partnerships Trust, Welthungerhilfe is helping smallholders in Gokwe to start anew.

Farmer Lucy Marimirofa, 53, has been a project partner from day one. © Monika Nutz
1 / 2
Corn is growing higher than ever in Gokwe; the crops haven improved significantly in the last few years. © Monika Nutz
2 / 2
How Welthungerhilfe Supports People in Zimbabwe

Gokwe, open to new ideas, is progressing toward the future. Better harvests leave the farmers with surplus product to sell on the market and earn additional income. We are planning additional educational measures and will support the people in acquiring new equipment and material as well as in founding small enterprises for processing their produce and selling it to a broader market. 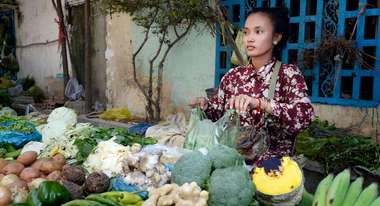 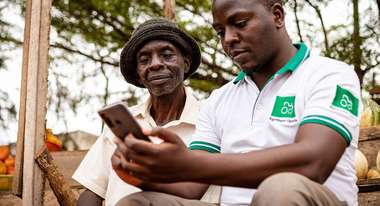