Aiah Brima carefully strikes a cocoa pod with a piece of wood. The ripe fruit breaks open, and the cocoa beans covered in white pulp spill out of the yellow pod. After carefully drying and fermenting them, the farmer will be able to sell them for the equivalent of about 2.50 euros per kilo. A good price, a fair price. Aiah Brima will use the money to send his children to school and expand his small cocoa plantation. Aiah Brima is one of around 46,000 cocoa farmers in Sierra Leone who are involved in Welthungerhilfe projects. In parallel with large-scale education and hygiene measures to protect people from contracting the Corona virus, regular project activities continue under the required rules - keeping your distance, washing your hands, wearing a mask.

Things go uphill after the war

He stands in the shade of a cocoa tree on his plantation in Kono in Sierra Leone. This poor country is known throughout the world for its ten-year civil war, which has left up to 300,000 people dead, the battle for blood diamonds, child soldiers and the outbreak of the largest Ebola epidemic, which claimed the lives of more than 11,000 people in Sierra Leone and other West African countries in 2014. Aiah Brima knows what his country is known for - and he wants to change that. In the future, he wants the world to think of his country not in terms of wars, disasters and diseases, but in terms of excellent cocoa and delicious chocolate. He works hard to achieve this.

Aiah Brima reports: "When we returned to our villages after the war, our houses had burned down and our plantations were totally overgrown. But we had no money to rebuild them. But thanks to the support of Welthungerhilfe, we are now able - and I say this with great pride - to cultivate 60 to 70 percent of our cocoa plantations again and significantly increase our harvests."

Aiah Brima prunes his trees with his new loppers, harvests the large cocoa pods at just the right time, lets them ferment in wooden boxes for about a week, and carefully dries the beans under solar tarps. He learned how to sustainably get the best out of a cocoa plantation - without artificial fertilizers and pesticides - in training sessions organized by Welthungerhilfe. He received tools such as machetes, saws and loppers, tarpaulins for the drying tents and wooden fermentation boxes as start-up capital. He now passes on his knowledge to other farmers, showing them how they too can increase their yields. The man with the warm voice is not afraid of competition. He is convinced that the demand for first-class, sustainable and fairly traded cocoa will continue to grow and that he can strengthen his position in global trade if he works together with other farmers in a spirit of trust.

Sahr John Moore has also completed the training for sustainable cocoa cultivation: "I used to work in a diamond mine. That was exhausting and dangerous. And I hardly got anything out of it. Since I learned to grow cocoa, my wife and I have been living much, much better," the farmer reports with satisfaction. Around a quarter of the cocoa farms in Sierra Leone are run by women. Khadijahtu Brima is one of them. Together with other women, she sets out in the morning with a sharpened machete over her shoulder to prune the cocoa trees so that they produce the best yield and do not develop fungal diseases. "I learned a lot in the trainings," Khadijahtu Brima says. She speaks quickly and loudly. She is happy, and she wants everyone to hear it. "We now harvest more and better cocoa and get a fair price for it. This has also changed our relationship with our men. They now respect us for what we do," says the president of the cocoa farmers' association breathlessly. Then she takes a breath - and smiles.

We now harvest more and better cocoa and get a fair price for it. This has also changed our relationship with our husbands. They now respect us for what we do.

Brima Samuel Bangura, deputy agricultural officer of the Kono district, can only confirm this. Since Welthungerhilfe began supporting farming families in sustainable cocoa cultivation, both quantity and quality have increased significantly. Thanks to a newly introduced digitalized system, more and more cocoa beans can now be traced back to the plantation. Knowing exactly where the cocoa comes from is also extremely important for Sergio Codonyer. The Spaniard worked for an international beverage manufacturer in West Africa for seven years, eventually becoming responsible for Sierra Leone and twelve other countries. Then he decided to become a social entrepreneur, i.e. an entrepreneur with a social cause. He founded the company Organic Africa Chocolate and now plans to build a chocolate factory in Sierra Leone to produce one of the best organic chocolates in the world for export to Europe and the USA. 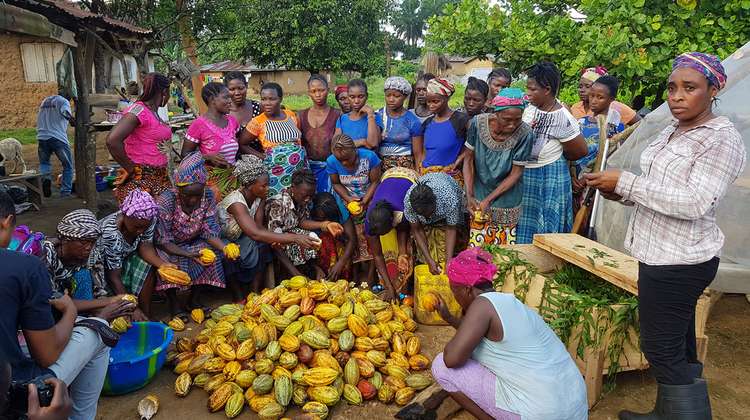 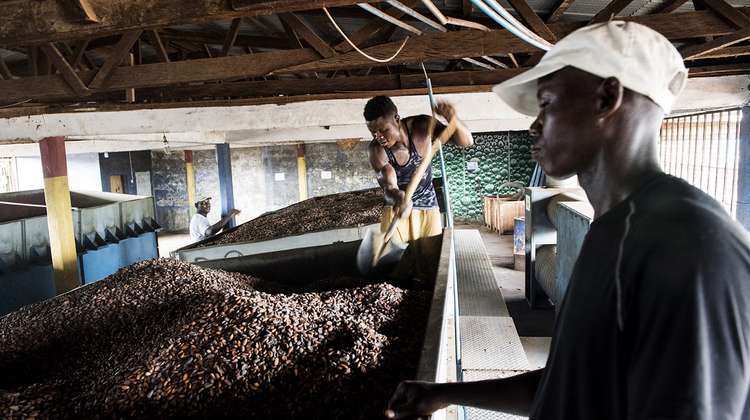 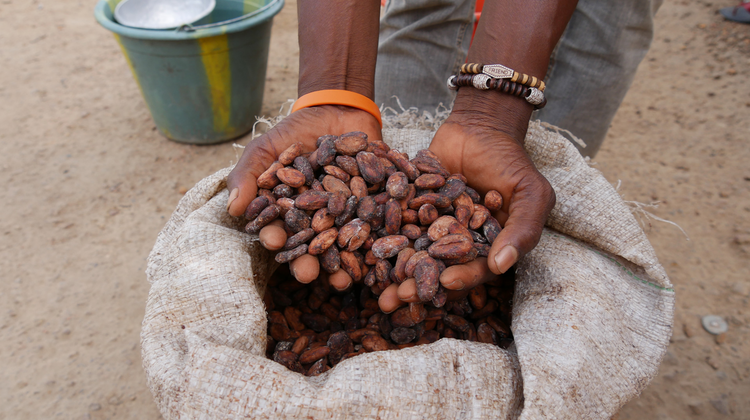 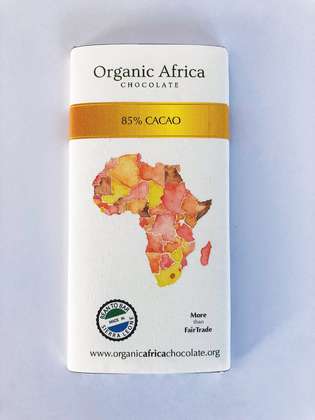 Up to now, cocoa from Sierra Leone has been exported exclusively unprocessed. A large part of the profit is made in the Global North, the Global South remains a cheap supplier of raw materials and thus at the mercy of the strongly fluctuating world market prices. Organic Africa Chocolate wants to change this and produce its exclusive chocolate entirely in Sierra Leone, thus extending the value chain locally and creating well-paid jobs. The factory is scheduled to begin operations this year. "For the cocoa farmers, it means a great opportunity that their goods will now be reliably purchased. Welthungerhilfe acts as an intermediary here, we advise on contracts, ensure that the farming families are paid fairly and, conversely, through our work with the smallholders, ensure that the producer can rely on the quality of the cocoa," explains Manfred Bischofberger, country director of Welthungerhilfe in Sierra Leone.

The potential is huge. At some point, two million farmers in West Africa are expected to work for Organic Africa Chocolate

Initially, the 52-gram bar of fine chocolate is to be sold in Spain, and later also in the USA and other European countries for around two euros. Germany is to play a very special role in this, after all it is the largest market for fairly traded organic products. "The potential is huge. At some point, two million farmers in West Africa should be working for Organic Africa Chocolate," says Codonyer, who has been thinking big since his last job at the latest. 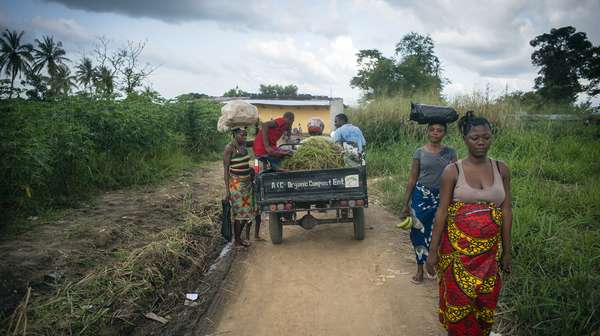 The cocoa farmers' results in cooperation with Welthungerhilfe are already impressive. Since the projects began 13 years ago, some 20 million cocoa seedlings have been planted, around 50,000 hectares of cocoa plantations have been restored or newly established, and 29,000 farmers have been helped to convert to organic certification. And this has been successful on many levels. At the same time, the still widespread malnutrition and undernourishment in Sierra Leone is being combated with a holistic approach. The increased income from cocoa sales has significantly improved the health of the families. Training in the diversified organic cultivation of fruit and vegetables, in sustainable forest management, including honey production, and in balanced nutrition and hygiene has also helped. This is an important success in a country where the majority of people live in great poverty - and one that motivates everyone. Welthungerhilfe project manager Derek Wambulwa Makokha: "The fact that 'our' farmers and cooperatives have already won national and international prizes for their cocoa makes them and us very proud." 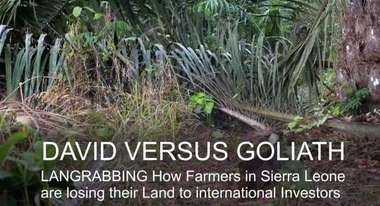 The residents of the Western Area Peninsula in Sierra Leone want to protect their forest. Welthungerhilfe supports them. 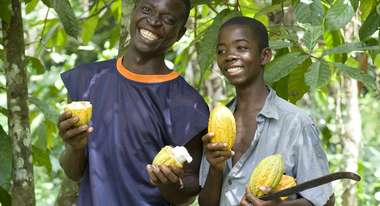 Organic Cocoa for everyone: Smallholders start over with ecological agriculture. Welthungerhilfe supports the smallholders in Sierra Leone.

Energy for the Future

In Sierra Leone the rural regions, in particular, required a functional supply of electricity.