In mid-August of 2017, heavy rainfalls in Bangladesh, India and Nepal led to severe flooding. In Nepal alone, 235,000 houses were damaged and 43,000 families lost their homes. In addition, 143 lives have so far been lost.

The number of victims in India is shocking as well: More than 17 million people are suffering from the flooding. In conjunction with its partners, Welthungerhilfe is distributing food and hygiene sets to the survivors, many of whom have lost everything.

Four of Every Five Residents Affected by Flooding

Especially in southern Nepal, the masses of water are causing severe damage. In the two districts of Rautahat and Saptari, approximately four out of every five residents have been affected by the disaster. Some 65,000 houses have been completely destroyed and approximately 120,000 additional houses are heavily damaged. People are living in emergency shelters on the roadside and are dependent on aid.

In India, the Bihar region on the border with Nepal was impacted the most by the flooding. 19 districts are completely flooded, and 514 people lost their lives. In the district of Dharbanga, some 100 villages are cut off from the outside world.

The flooding has destroyed crops and food supplies and has contaminated wells. Food and drinking water are therefore urgently needed.

How Welthungerhilfe is Helping in Nepal

In conjunction with its Alliance2015 partners Concern Worldwide and People in Need, Welthungerhilfe is distributing food packages as well as water purification and hygiene sets in the most-affected regions.

How Welthungerhilfe is helping in India

In conjunction with the local organisation GPSVS, Welthungerhilfe has distributed the following goods to the population: 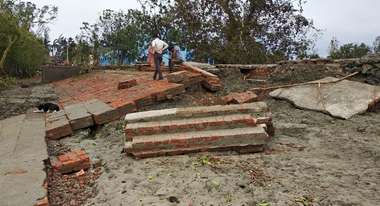 100.000 € for victims of cyclone Amphan and coronavirus

A Family Fleeing the Water

Fulia Devi is one of the thousands of people who were affected by the flooding in Bihar in India. A moving story.