“Every child here knows that they need to run up the mountains if they feel the earth move strongly three times after another, or if the water pulls back”, explains Lilis Abonita. The mother of a two-year-old son sits in her newly-built house on the island of Simeulue. The walls are freshly painted green, a rug lies on the laminate floor, the windows are framed by ruffled curtains. There are even built-in cupboards in the living room.

To look at Lilis Abonita’s small house, you see a family living here who have achieved modest prosperity. Ten years have passed since the tsunami that cost the lives of over 230,000 people in eight countries. Its epicentre lay only 85 kilometres from Simeulue, the Indonesian island off the coast of Sumatra. The destruction here was also immense, but only two people died. For generations, the 80,000 residents have been taught of a tsunami in 1907 that cost the lives of thousands of people on Simeulue.

The sea took the people’s livelihoods

Before the disaster, Lilis Abonita had a small kiosk directly on the beach. She sold coffee and noodle soup from it. On 26th December 2004 she wanted to celebrate the new opening. With a few tables she had expanded the kiosk to a restaurant. Then the earth trembles, like never before. Her father takes the few steps towards the sea and sees that the water has drawn back. He runs to his family and cries, “Run, run!”. Halfway up the green, thickly overgrown mountain behind the village, they see the sea come in. The wave, black and as high as two coconut trees. Lilis Abonita sees her restaurant being swept away, the new tables and chairs – her entire livelihood.

Lilis Abonita and her family had nothing more than the clothes they were standing in. Out of old wood, the fallen palms and boards that the sea had washed up, her husband built a hut at the foot of the mountains. After five months they ventured back home. At the beginning it was difficult. But then the family received one of the new houses that Welthungerhilfe had built on Simeulue and two million rupees (around 130 Euro) as start-up capital for their new restaurant.

Emergency aid and reconstruction in Indonesia

After the tsunami, Welthungerhilfe invested 23.3 million Euro in Indonesia: in houses, schools and wells, in seeds, cows and small loans, in order to help the people with the new start. On the remote island it was, above all, difficult to procure materials, explains René von Prondzinski, who built houses on the island for ten months. Everything had to be transported by boat on nine-hour-long journeys. Welthungerhilfe built 150 temporary wooden houses and 310 stable, earthquake-proof houses from metal and lightweight construction. Many of the 36-square-metre houses are brightly painted. Some residents have planted gardens, others have expanded their small houses, like Lilis Abonita, who now has two more rooms and a covered passageway to the restaurant.

And if the earth trembles again? “Then I’ll run again.” Lilis Abonita always has a bag packed ready for emergencies.

Andrea Kümpfbeck is a head of department at the "Augsburger Allgemeine". The unabridged article can be found in Welthungerhilfe's newspaper Welternährung 4/2014 (in German only). 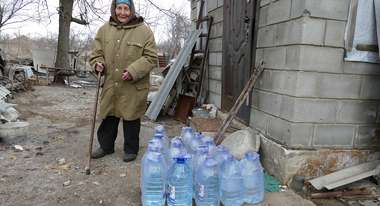 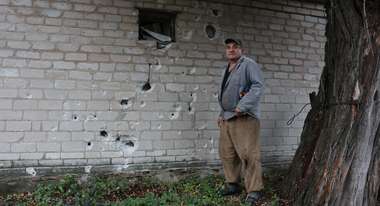 Support to the conflict-affected population of Ukraine

Alliance2015 members prepare to scale up support to the conflict-affected population of Ukraine.