Millions of people are starving and struggling to survive. Help now with a donation!

Hungry, thirsty, severely weakened – this is the situation of millions of people in East African countries such as Kenya, Somalia, Ethiopia or Uganda. People are suffering from the effects of extreme drought. As a result, around 21 million people in East Africa are currently going hungry. They are struggling to survive.

Drought in East Africa: No Water, No Harvest, No Food

The situation is currently life-threatening, especially in northern Kenya, many parts of Somalia, southern Ethiopia and northern Uganda. The lack of rain is a silent disaster for the people in East Africa. The situation is dramatic: the soil is far too dry to grow crops or vegetables. For smallholder families, this means no harvest and not enough to eat. Many pastoralist families have already lost up to 70 percent of their livestock –which is often their only source of income and their livelihood. As a result, they can no longer afford to buy food at the markets. The situation is exacerbated by the sharp rise in global food prices. Many millions of lives are threatened by hunger.

The situation is dramatic. People are in danger of starvation if help is not provided quickly.

Help now: With your donation, you can support us in reaching people in need in East Africa with our emergency aid. 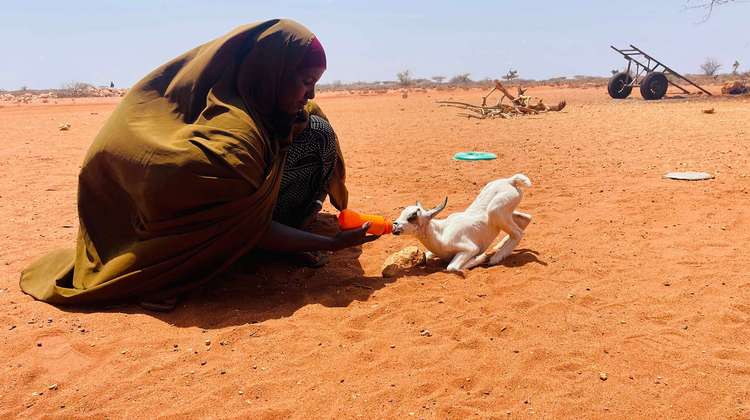 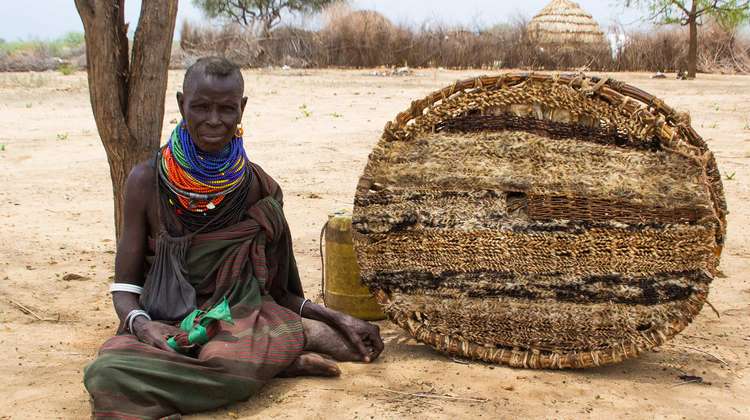 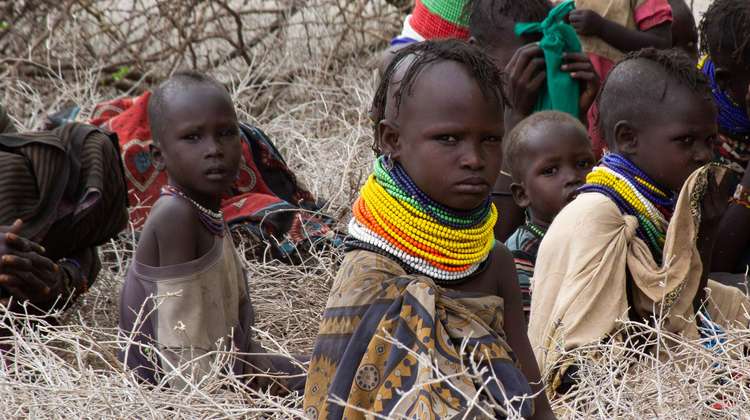 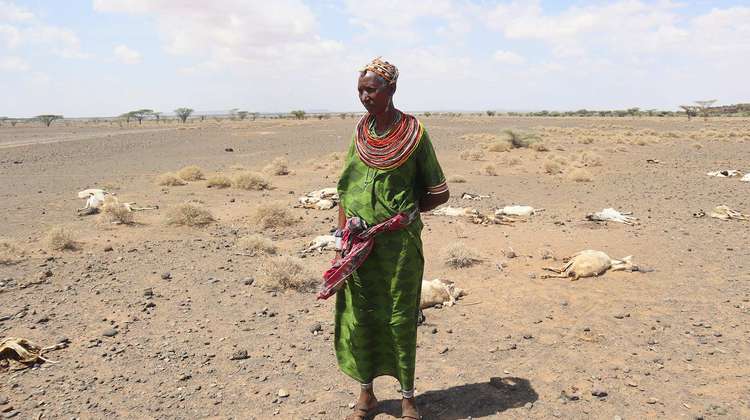 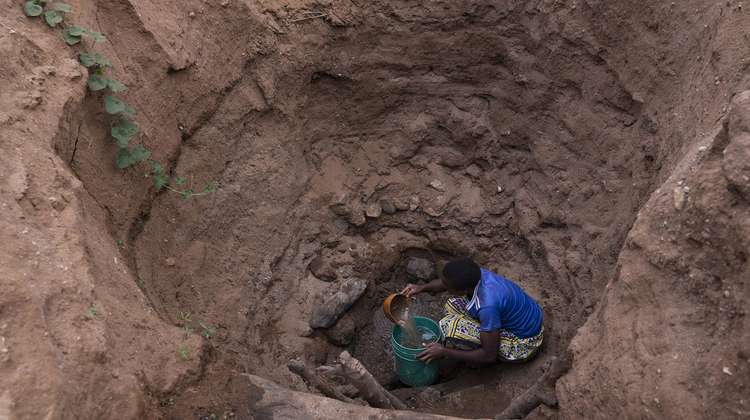 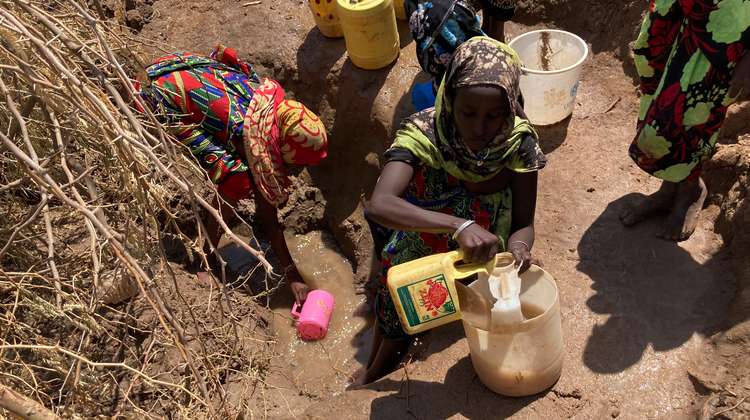 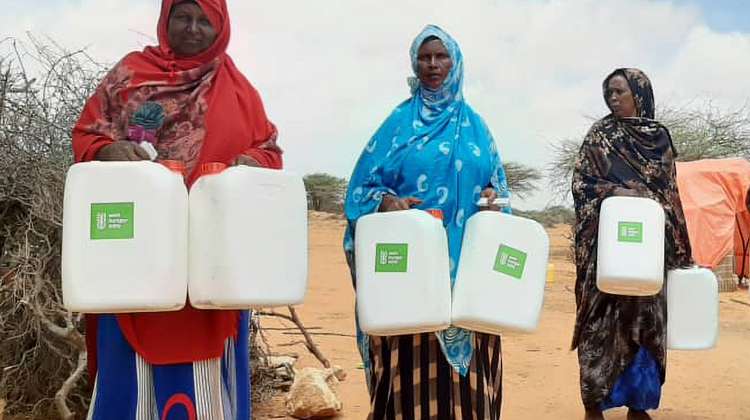 Ikraan Abdullahi Jama feeds a small goat the same bottled milk as her children because, like many farm animals, the goat's mother died due to lack of pasture and water. In Somalia, many people depend on their livestock. Millions of animals have already died. © Welthungerhilfe
1 / 7
Napetet Lodchodo Lojore has lost all her livestock. Because her three donkeys have also starved to death, the 68-year-old now carries the wooden pack frame of the donkey (to her right) herself. She is on her way to the refugee camp of Kakuma and takes a break under a tree. © Bettina Rühl/Welthungerhilfe
2 / 7
Over half a million children are malnourished due to the ongoing drought in Kenya. © Bettina Rühl/Welthungerhilfe
3 / 7
Pastoralist Lucy Kele stands next to the carcasses of her goats in Marsabit, Kenya. She has lost over 30 goats and sheep and six camels. © Asenath Niva/Welthungerhilfe
4 / 7
In many places, the water supply is extremely poor. In the Kenyan region of Kinakoni, a hand-dug well in a dried-up riverbed serves as a source of water. © Jonas Wresch/Welthungerhilfe
5 / 7
The existing water is often heavily polluted and can cause diseases. Existing water points and water collection systems urgently need to be repaired. © Welthungerhilfe
6 / 7
The situation in Somalia/Somaliland is extremely worrying. With our partners, we are distributing relief measures such as the distribution of water buckets, food and cash. © Welthungerhilfe
7 / 7

Drought in East Africa: No End in Sight

Due to the prolonged and recurring droughts, people, animals and nature in East Africa can hardly recover. Even when it rains, the arid soil can barely store the water. As a result, sudden rainfall sometimes leads to flooding in the drought-affected regions. In addition, East Africa has many overlapping disasters that weaken people's resilience: In the last two years, the region has repeatedly had to cope with major locust plagues. Add to this the Covid-19 pandemic and violent conflicts. All these crises lead to additional crop failure and thus to hunger. Some 21 million people in East Africa are already suffering from hunger. It is feared that this number will increase if no rapid aid is provided now.

Welthungerhilfe is on the ground preparing emergency relief measures to protect the people in East Africa from further suffering.

How Does Drought Occur?

A drought is a prolonged dry period. The absence of rainfall leads to water shortages. Water scarcity can have a variety of dramatic health, agricultural, economic, and environmental impacts. Droughts threaten people's livelihoods, increase the risk of disease and death. These climate change-induced circumstances lead to increased migration.

The rise in temperature due to climate change is causing already dry regions to become drier and wet regions to become wetter. In East Africa, this means in many places that rising temperatures are causing water to evaporate more quickly. This increases the risk of droughts. In addition, droughts tend to last longer due to global warming.

Welthungerhilfe is active in many regions of East Africa – support our emergency aid with a donation.

The situation is dramatic, with around 4.4 million people in Kenya facing a food crisis due to the drought. The government has declared a state of emergency. In October 2021, some areas on the coast and in southeastern Kenya reported the lowest rainfall since 1981, and Kenya's worsening drought has significantly affected crop production. Over half a million children are acutely malnourished and require treatment. Water sources for people and their livestock have dried up. Families are forced to walk long distances to access water. This leads to tensions between communities and increases conflict. The livelihoods of pastoralists in particular are threatened. In the regions of Kajiado, Tana River and Marsabit, million animals have already died, and the remaining herds are in poor health. Many children can no longer attend school because they do not have enough to eat and have to travel long distances in search of water.

Around 24.1 million people are affected by the drought in Ethiopia, and some 9.9 million people are going hungry. Water reserves are almost exhausted, and more than 3.5 million animals have already died. Many parts of the country have still not recovered from the catastrophic drought in 2016: Ten million people were threatened by extreme hunger, and many lost their lives. The long-term damage of the recurring drought mainly affects pastoralists and farmers. More than 8.3 million inhabitants don't have access to clean drinking water.

In Karamoja in northern Uganda the situation is dramatic. It has hardly rained in recent months, resulting in poor harvests and hunger. There are reports of 900 hunger-related deaths, but the acutal number of casualties is probably much higher. People have used up their food supplies as the dramatic situation has stretched on for many months. They are therefore dependent on buying additional food, however the prices on the markets have doubled or even tripled. Sometimes the villagers eat nothing for five days and drink only water, says a village elder in Karamoja. In response Welthungerhilfe has distributed food packages for 900 households in the region. Another below-average rainy season is forecast for September to November 2022. Pasture, water and food resources are likely to continue to deteriorate. This means people are in urgent need of support to survive this extremely threatening period.

In eastern Uganda, heavy rains caused flooding, flash floods, and landslides in early August 2022, resulting in deaths and severe damage. If the rains continue, there is a high risk that the food insecurity situation in the affected regions will further worsen after the long drought of recent months. This risks an increase in malnutrition and the chances of contracting cholera or malaria.

In November 2021, the government of Somalia declared a state of emergency. The drought has now reached 90 percent of the country. The nutrition of about 7.8 million people in Somalia is acutely endangered. In some regions, the rainy season is failing for the fourth year in a row. Thousands of people have left their villages in search of water, food and pasture. Currently, families spend an average of 50 percent of their income on water transportation, and many schools are closed because they don't have access to water. Somaliland is also affected by the drought. Farmers have been unable to sow crops due to the drought. Livestock trade is suffering extremely. In total, more than 3 million herd animals have already died from the drought, and the remaining animals are hard to sell due to their poor condition. 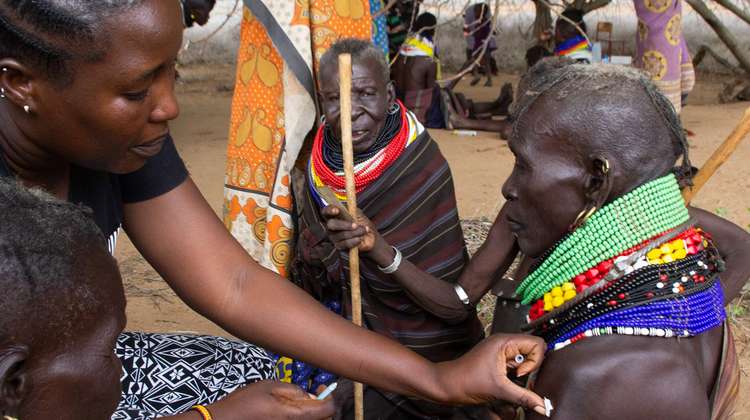 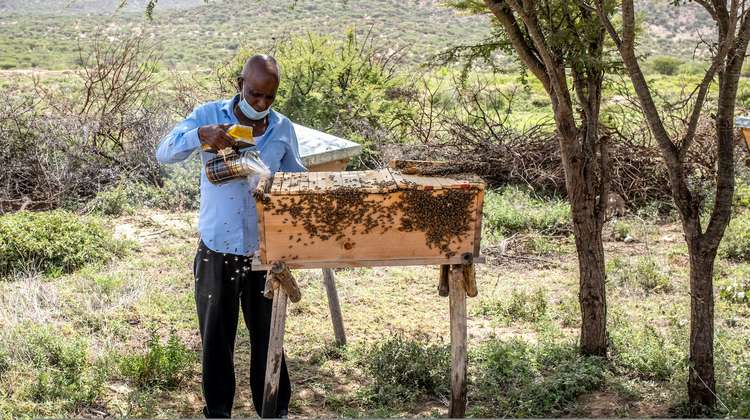 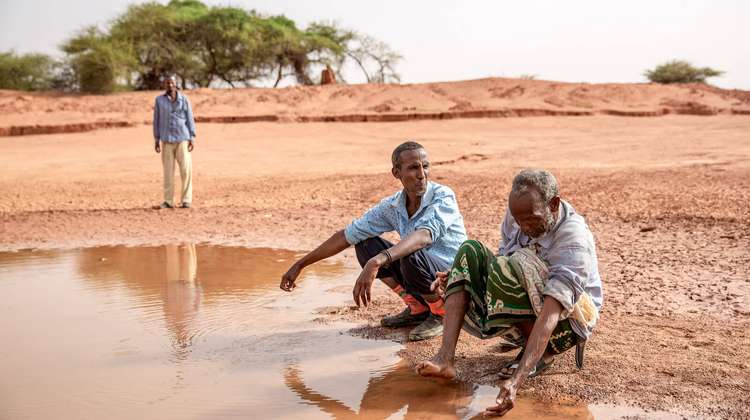 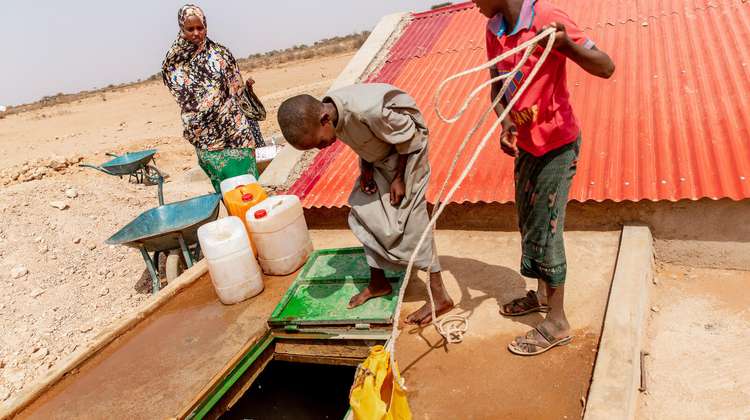 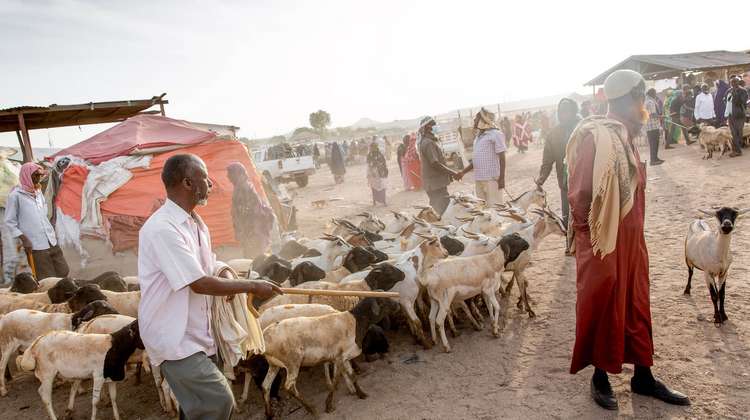 COVID-19 vaccination in the mobile clinic in Naduat. The Kenyan government provides the staff, and Welthungerhilfe provides logistical support.
1 / 6
The effects of drought, climate change and dwindling biodiversity are taking their toll on bee populations. Welthungerhilfe providing beehives to beekeepers in Liberia to support their livelihoods.
2 / 6
Drought in Somalia: Welthungerhilfe distributes water containers to women.
3 / 6
Welthungerhilfe renovated and partially rebuilt an earth dam in town of Odweyne. The project also included laying new pipes to the water tank in the village, a solar station and fencing around the entire site to keep out animals and intruders.
4 / 6
In the Maroodijex region, Welthungerhilfe has built a new water reservoir in the town of Salahlay. It has become a vital hub for the pastoralists living in nearby villages – many of them nomads.
5 / 6
Welthungerhilfe has overseen the building of a new water reservoir near the town of Odweyne. When the next rainy season comes, the water can be collected and used to provide water to livestock.
6 / 6
How Welthungerhilfe is Helping on the Ground 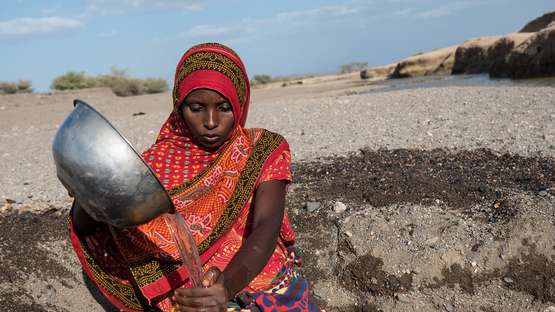 could provide a family in Somaliland, for example, access to clean water for three months. 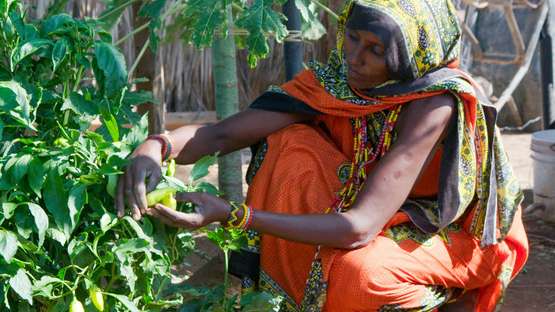 could provide a family in Kenya with the most needed basic foodstuffs for one month. 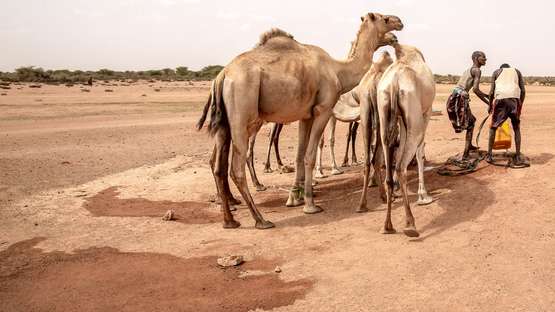 could provide pastoralists in Ethiopia with feed for 10 animals for a month.

could provide a family in Somaliland, for example, access to clean water for three months.

could provide a family in Kenya with the most needed basic foodstuffs for one month.

could provide pastoralists in Ethiopia with feed for 10 animals for a month.

What causes drought in Africa?

When urgently needed rainy seasons fail to materialize or turn out to be far too short, droughts occur. The lack of water can lead to soil erosion and even desertification. A major reason for persistent soil drought is man-made climate change. Here you can find more information about soil erosion.

Why is the Horn of Africa repeatedly affected by famine crises?

The region repeatedly experiences extreme weather such as droughts and floods. The soil is far too dry to grow crops or vegetables. For smallholder families, this means no harvest and not enough to eat. Without fodder and water, the animals of the pastoralist families die. In addition, the prices for basic foodstuffs are rising enormously. Many people can no longer afford to buy food at the markets and have to go hungry. After last year's locust plague and in the wake of the Covid-19 pandemic, people no longer have any reserves to counter the drought. Poverty, wars and armed conflicts are also drivers of hunger. Decades of exploitation by industrialized nations are making it difficult for many African countries to extricate themselves from the poverty trap.

How can the incidence of drought in Africa be reduced?

Many extreme weather events such as droughts are due to climate change, or are becoming more frequent and severe as a result of climate change. Mitigating the climate crisis is therefore an important step in combating hunger. This requires political solutions. But even on a small scale, everyone can make a contribution and help slow down climate change by living a sustainable lifestyle. Prevention is one of the most important measures to mitigate disasters such as crop failures. Welthungerhilfe uses various tools and measures to provide humanitarian aid before disasters occur. Early warning systems with prediction-based risk management enable affected people to act early in the event of a foreseeable drought and initiate food security measures. Such measures are vital for the survival of the worst-affected populations.

What are the consequences of drought?

Persistent droughts deprive millions of people of their livelihoods. Harvests fail, and supplies are quickly used up in many places. Crop losses plunge people into double misery. On the one hand, families can no longer live off their own produce; on the other, food prices skyrocket due to the shortage. People living in poverty cannot pay these prices and have to suffer from hunger. Water shortages also exacerbate the potential for unrest and fighting over the scarce resource, especially in politically unstable countries. Conflicts and precarious living situations lead to people having to flee to other regions or countries.

Welthungerhilfe has been holding the DZI seal of approval for donations since 1992. The seal certifies that Welthungerhilfe is handling the funds entrusted to it efficiently and responsibly.